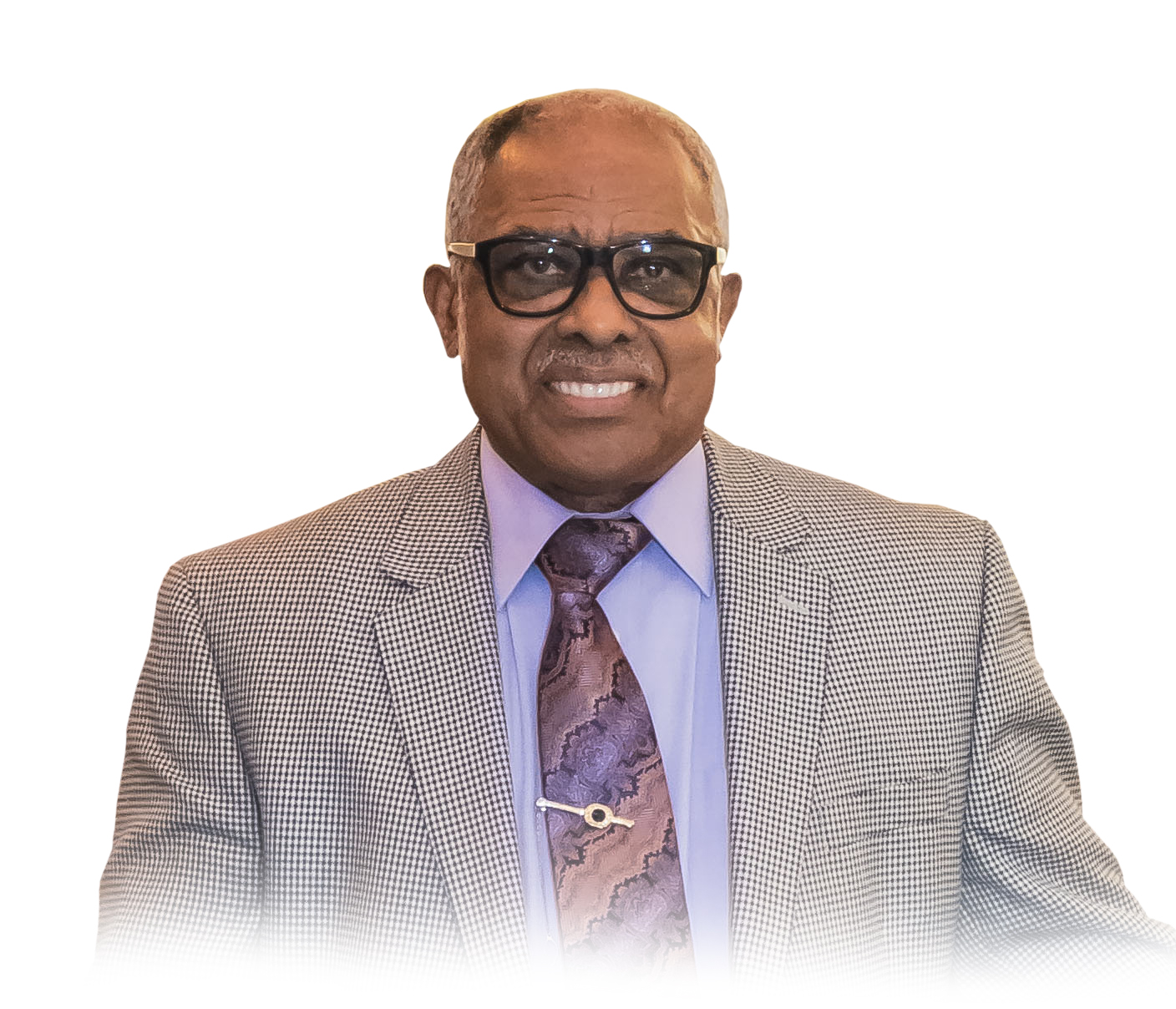 The local church at Aberdeen Street owes a great debt of gratitude to Bishop T. A  McCalla MBE. He was a great pioneer, exceptional leader, father and mentor.

It was under his inspirational, visionary and sacrificial leadership, that this congregation quickly outgrew the building at Peel Street. He led the church to purchase the land and erect the current building at Aberdeen Street, which was opened in 1979, without the need for a bank loan. At its new location the congregation continued to experience tremendous growth spiritually, numerically, rich fellowship, and financially, under his leadership.

Bishop McCalla was a contemporary leader who was not afraid to embrace change and new ideas. He will be remembered for his limitless love, compassion and care for people. Long before the idea of things like Food Banks were conceived, he was the original Food Bank.  He regularly went to wholesale supermarkets to do major shopping, much of which he distributed house to house, often to struggling single mothers and those in need. Frequently when people fell into financial crisis, he would come to their rescue often at great personal costs.

Bishop McCalla took particular interest in mentoring and supporting young people in all aspects of their lives. Although he was a strict disciplinarian, he made no secret of the fact the he wanted young men and women to be the best they could be spiritually and temporally. Many past and current members of Aberdeen Street attest to this. Bishop McCalla was a father to the fatherless, opening his doors to anyone who needed somewhere to stay, and treating them as a member of his family. When it came to weddings, he would be involved in all aspect as if it were his own children being married. He would often purchase the materials to make suits for the groom and escorts, do the shopping, and head the catering team in the preparation of the food. On the day of the wedding he would conduct the marriage service, and by the time you got to the reception he would be in the kitchen giving the staff a hard time to make sure everything went to plan.

Bishop McCalla had the amazing ability to see God’s calling on individuals long before anyone else, even the person themselves. He would provide a place of ministry for those individuals to develop their gifts and abilities until they and the congregation recognised God’s call which he foresaw.

All of us have abilities or good qualities, but rarely do we find in one person so many of the qualities found in Bishop McCalla. He had a great sense of humour and had a way of turning almost everything into a joke; and he did not take himself so seriously that he could not laugh at himself also. In his own self-deprecating way, he would lament the fact that he lacked the opportunity to obtain an education. But anyone who knew him would quickly realise that what he lacked in formal education he more than made up for in experience, wisdom, courage, determination and plain common sense. Under the influence of the Holy Spirit he was anointed to minister beyond his natural abilities. His preaching was passionate, inspirational and compelling.

Bishop TA, as he was affectionately known, was a great leader among leaders, a visionary, a doer, a man of enthusiasm and devotion who spent his life on worthy causes in the interest of others. His service to God, the church and wider community has been unwavering and exemplary; he is indeed a man of God.  His extensive work was not confined locally, but extended across this country, Ghana, Nigeria, Jamaica and elsewhere.

Today we celebrate his kindness and willingness to spend and be spent in worship of God and in service to humanity. We celebrate his compassion for people in need and the extent to which he would go in order to make a difference. We celebrate his vision and unwavering commitment to bring it to reality. We celebrate his amazing business acumen, his integrity and Christian principles. He taught us to be committed and determined; to work hard, not to be discouraged and never to give up.  He was the original ‘starter finisher’.

The memories of his big personality, integrity, passion, achievements, strength and courage are permanently etched in our minds. Gone, but never forgotten.

To give to this project please do one of the following:

Give directly by Bank Transfer – see Bank details on flyer 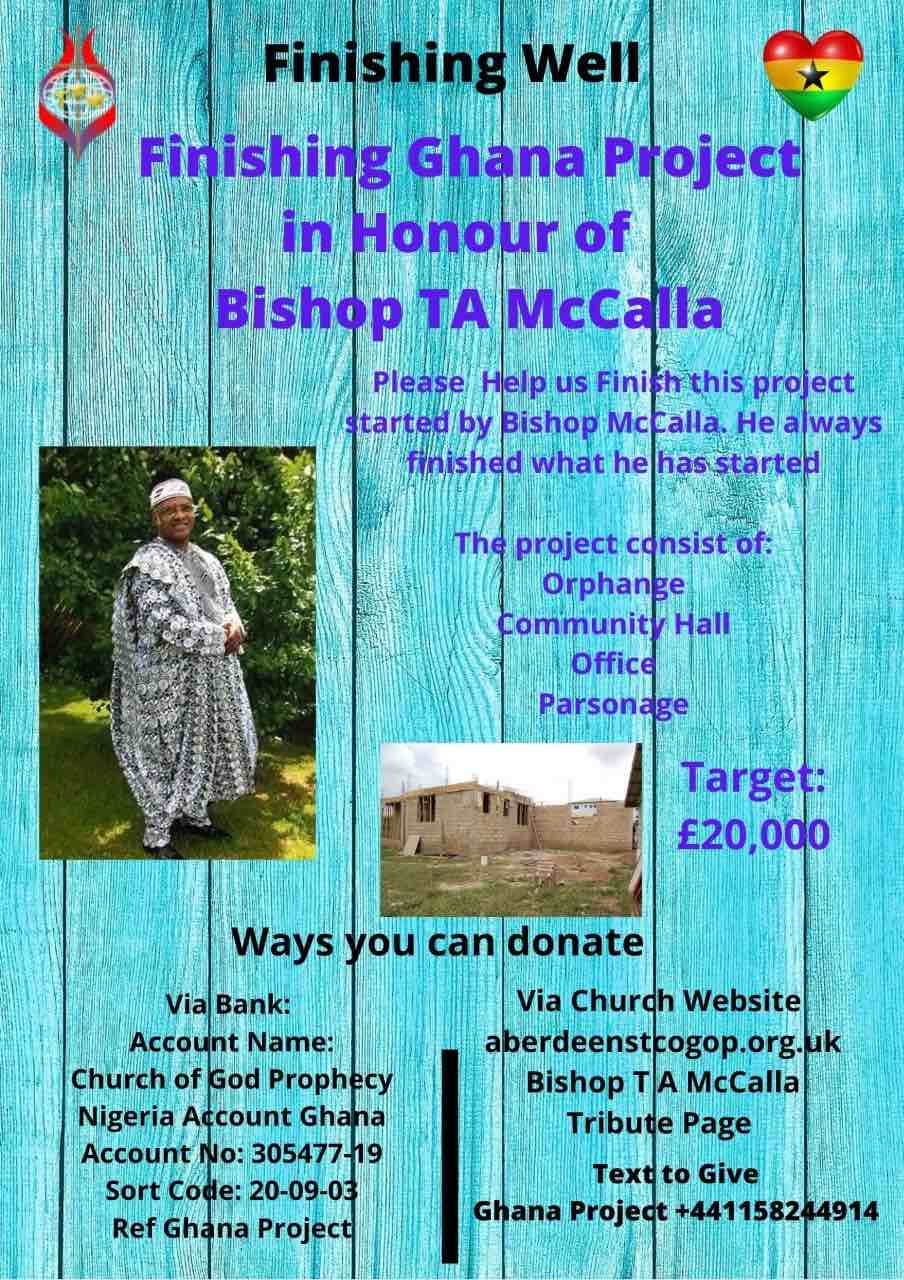